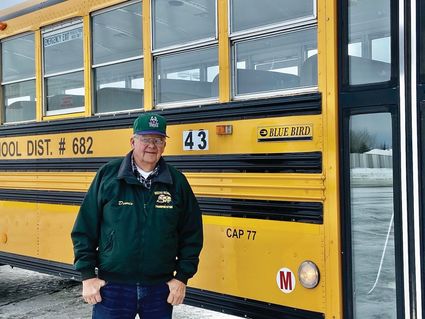 The master with his prized 43 bus

Imagine driving a school bus ever since President Gerald Ford was in office and, during that time, kids have thrown up in the bus, needed to go to the bathroom and can you drive the bus a little faster, and all the usual kid stuff like suffering nose bleeds and various unexpected emergencies.

It's daycare on wheels.

Roseau School District 682 bus driver Dennis Strandlund, 77, is pulling the pin after 43 years of driving kids to and from school.

"It's actually 43 and a half years," he said recently while adding that he drives roughly 100 miles a day on Route 1.

He has his routine.