Katie Borowicz is a Golden Gopher 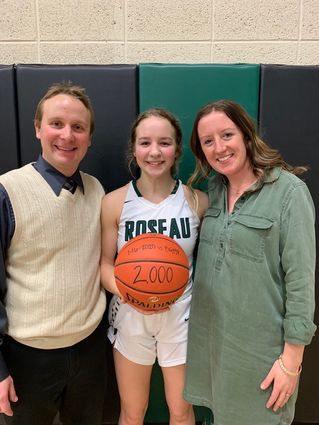 On Saturday evening, Kelsey Didrikson was weighing in on losing the best player on her team.

It was evident in her voice - a little bit of shock and awe. Anyone who has coached never wants to lose the bona fide star.

Katie Borowicz is a star.

"She has all her high school credits," said Coach Didrikson. "So, she's done with high school."

It was noted that the Rams basketball team had quite a run with this girl.

"It's crazy! Never would have dreamt it ending this way. She is the last Borowicz girl, giving a nod to her older sisters, Kiley and Kacie, both all-staters.

"She's the most talented. I think she said somewhere that she is leaving her high school career a little bit unfinished. She certainly would have been a Miss Basketball candidate. Kacie was Miss Basketball."

Didrikson added that Katie's older sisters were 3,000 point scorers, and she would have been on pace, too.

"But obviously, she was the one who got recruited at the highest level."

Katie will not only get this winter's playing time. She will also have four more years of eligibility and be on a full scholarship.

"It wouldn't even be a thing if there wasn't Covid," she said, adding that Katie had told her that if she knew there was going to be a state tournament, she would have been very tempted to stay.

"But there are so many unknowns. Without having to use a year of her eligibility, she gets to play an extra year with the Gophers."

"It sucks because we would have liked to make another competitive run in the section. You build a schedule and pick opponents to try to prepare you for that. Obviously, other teams are excited to play Katie. She's the best guard in the state. It's a bummer for us and Section 8 and high school girls basketball. It is what it is."

When did you learn that Katie was moving on?

"She told Isaac (assistant coach Erickson) and me in November right after Signing Day. She's such a goal-driven girl and when the State High School League season got pushed back, it didn't help our case."

She had asked Katie a few times where she was at on her decision.

"She stopped by last Saturday. We had a nice visit, and she turned in her jersey and moved down to the Cities last Sunday (Dec 27). She met up with both Isaac and me before she left. So, that was nice."

Coach D, as she is called by her players, understands that Katie is joining a great program.

Yet, she is leaving an excellent program.

What are Katie's strong suits?

"She's the best point guard in the state, an incredible ball handler, and she's just good at all of it - a tenacious defender, obviously a scoring threat, smart, and has very good court vision," said Didrikson, appreciative of having coached such a fine player.

"What really sets Katie apart is she loves it and is a competitor through and through. She likes the grind, and she's built differently as Isaac would say."

Coach D explained that by "built differently," it's her mental toughness, her goals, and her basketball IQ.

"She comes to practice everyday with the mentality of wanting to get better."

"It certainly is the end of an era. All good things must come to an end. We have some good players. In the grand scheme of life, this is basketball, and it's a good opportunity for Katie," she said, mentioning that she and Isaac have discussed Katie's departure.

"It's kind of an empty feeling. It is emotional because it's been this incredible run and a bummer for us because it's ending this way and we're not making another run with her. She's been in our gym since the seventh grade and I would never have thought this would happen in the middle of a pandemic."

There have been a few tears, of course. It would be the same if one of any team's stellar athletes were to suffer a season-ending injury.

"I couldn't have scripted it this way," she said, acknowledging that Katie will represent Roseau well wherever she goes.

That's the beauty of it.

On Sunday evening, Katie was reached by phone on the U of M campus.

"I've had two practices," she said, adding that she couldn't play against the Wisconsin Badgers, whom the Lady Gophers defeated 88-83 in OT, because she needed so many negative Covid tests.

"I still got to go," she said and giggled when asked her age.

She's excited to be with the Gophers.

"It's awesome so far," she said, adding that she isn't homesick yet."

Are you the shortest on the team?

She was asked about the practices.

They're usually right around noon and are three hour practices. So, they are right in the middle of the day, which works out pretty good."

She added that they practice at Williams Arena the day before a home game or on the same day, like a morning shoot around.

How are your classes?

"We're figuring that out in a couple of days because the semester doesn't start back up until January 19. So, I still got some time."

"Some type of sports medicine or possibly a physical therapist or a trainer or something like that," she said, also mentioning sports management."

Then, she was looking ahead to playing in her first game as a Golden Gopher.

She wants to contribute.

Riding the bench isn't her style.

"I was a little bummed I can't play yet but hopefully soon," she texted on Sunday evening prior to the phone interview.