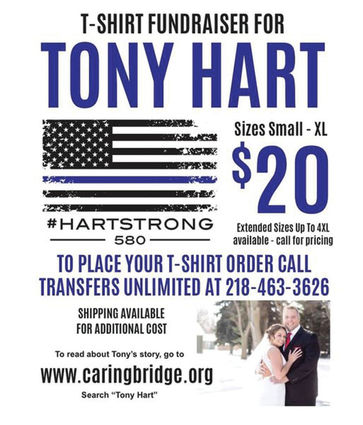 In 2008 Tony Hart was given the news that his diagnosis was heart disease and he would need a pacemaker. Fast forward to his current situation and Tony is actively listed on UNOS and is in need of a heart transplant.

Back up a few years. In 1981 Tony Hart and Andy, his identical twin brother, were born at the Roseau Area Hospital (LifeCare Medical Center) to the late Jim Hart and Colleen (Hart) Wilson. The boys joined Jennifer, their older sister, at home. The family lived in Roseau, Badger and Jamestown, N.D. before making Baudette their home.

"Growing up Tony loved playing sports and was a very active individual," said Colleen. After being diagnosed in 2008 Tony still lived a healthy lifestyle with no complications from the pacemaker.

After he moved to East Grand Forks, he met his now wife Katie (Hruby) Hart. The couple dated for several years and were married in February of 2018.

In September of 2020 Tony developed a cough, which didn't seem to go away. He went to Sanford where they gave him a steroid and on antibiotic. They seemed to help but the cough continued.

In October, Tony developed some indigestion issues and was admitted to Altru in Grand Forks. Altru felt it was pancreatitis. After more follow-up the doctors determined that he had gallstones and removed his gallbladder on October 27.

During all of this his cardiologist noticed some irregular heartbeats and suggested treating this aggressively with new medication and a new pacemaker.

On December 9, Altru installed a new pacemaker. The new device had three leads instead of two like his original one. The doctors were unable to secure the third lead to help his ventricles get in sync.

"Tony still continued to deal with what felt like indigestion, loss of appetite and weight gain," said Katie.

He was admitted back into Altru hospital on Saturday, December 12 and was put in ICU because he had fluid build up. "His kidney function was minimal and his liver wasn't doing well either," said Katie. On December 15 Tony was airlifted to the Mayo Hospital in Rochester.

December 19 in Mayo, things took a turn for Tony and his heart started beating rapidly, blood pressure dropped and he was rushed into surgery. The next 24-48 hours were very crucial to determine if Tony would need an L-Vad (Left Ventricle Assist Device), heart transplant or both.

Tony has continued to have his ups and downs throughout the rest of December and January.

On January 2 Katie posted on Tony's CaringBridge Site. All of the medical staff is taking wonderful care of Tony, but Tony's nurse last night was amazing with him. He asked her to play his playlist from his phone and he was singing along to Hank Williams and also singing the song Country Road. They went through all of his text messages from everyone and I just know how much love he felt going through all of them. A lot of you know the song 'In Spite of Ourselves' by John Prine is one of Tony and my favorites. We sing this together on a lot of occasions. He asked his nurse to play that song last night and he sang his part and I sang mine on the phone together. There wasn't a dry eye in his room. That man of mine is pretty amazing & incredibly strong. A testament to the true love the couple shares.

"I continued to try to wrap my head around everything that was happening. Tony is the strongest man I know and I knew he would continue to fight," said Katie.

Tony has been doing a lot better as we enter into February. Each day is better than the last. He's working hard with PT/OT and getting stronger every day. "His voice is nice and strong again," Katie said. He was taken off sedation entirely on Sunday and is tolerating it very well.

Katie said, "Tony passed his swallow study today!" He was able to have a couple glasses of water and a chocolate shake. "He has to take things slow, of course, but this was just the news we needed to hear today," said Katie.

Tony is currently waiting for his heart transplant. "The transplant team wants to rule out any possible infection, plan for the best outcome and longevity for post transplant," said Katie.

They are hoping for some good news in regards to that by the end of this week. The ID doctors are trying to rule out fungal pneumonia due to the nodules on his lungs before moving forward.

The whole family along with Katie, his mom Colleen and her fiance Randy Holmberg, his stepdad Bill Wilson, Grandma Marilyn (Dahlquist), their friends, their co-workers and even strangers continue praying and fighting right along with Tony.

"Please keep the prayers coming for Tony's continued strength, positive vibes and negative cultures. Of course the biggest gift of all would be a strong and healthy heart. As we all know, this is the biggest gift one can receive and we'll be forever grateful to the donor and their family," said Katie.