I had a Blonde Moment...I Know Quite Shocking!?! 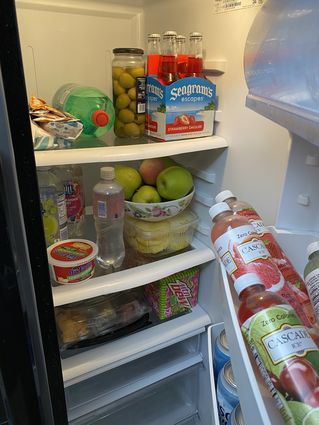 When we arrived at our condo I thought it was so nice of the owners to leave us a bowl of fruit! What a nice little welcome to South Padre Island. I decided it should be put in the fridge so it stayed fresh.

Kyle went to get something from the fridge and he said, "Did you put the bowl of fruit in here?!" Well yes, who else would! He said, "You do know it's fake fruit!" What, no way...I had to go investigate. Ummm ok, he was correct! (That doesn't happen often...lol)

I sent Brandon the same photo as above and he says, "Don't feel bad someone else must have thought it was real too. Look at the bite marks in the top left apple!!" He was right! Thank goodness it wasn't just me that was having a blonde moment! Oops!

The beach in SPI was amazing and if you drive to the north end of the island it doesn't have any buildings and you can drive on the beach.

We chose to walk on the beach since there were three vehicles stuck at the entrance of the beach access.

It was beautiful and I couldn't believe all the seashells!

You probably know by now that I like collecting rocks on our trips, but my other favorite is seashells. There was an abundance and I enjoyed every minute of my collecting time!

There were also a lot of blue bottle jellyfish the first time we went to the north end. They were interesting to see, but I'm glad they were gone when we took Carla and Berry seashell picking. It would have hurt if we would have stepped on one by accident! Carla found a ton of shells too...fun times!

Preheat oven to 350 degrees and grease a 8" or 9" square baking dish. An 8" dish will yield slightly thicker bars.

In a large bowl, combine 1 cup flour, oats, sugar, butter, baking soda, and salt. Mix to form crumbs. Put aside a rounded 1/2 cup of the mixture. Press remaining crumbs in the bottom of the prepared baking dish. Bake for 10 minutes.

Sprinkle remaining crumb mixture on top trying to cover most of the caramel. Bake for 15-20 minutes or until golden brown. Cool completely before cutting. You can speed these up by placing the bars in the fridge. Serve and store bars at room temperature.

This can be doubled and baked in a 9x13 baking dish.

A lady about 8 months pregnant got on a bus. She noticed the man opposite her was smiling at her. She immediately moved to another seat. This time the smile turned into a grin, so she moved again. The man seemed more amused. When on the fourth move, the man burst out laughing, she complained to the bus driver and he had the man arrested.

The case came up in court. The judge asked the man (about 20 years old) what he had to say for himself. The man replied, "Well your Honor, it was like this: When the lady got on the bus, I couldn't help but notice her condition. She sat down under a sign that said, 'The Double Mint Twins are coming' and I grinned."

"Then she moved and sat under a sign that said, 'Logan's Linament will reduce the swelling,' and I had to smile."

Then she placed herself under a deodorant sign that said, William's Big Stick did the trick,' and I could hardly contain myself."

"BUT, your Honor, when she moved the fourth time and sat under a sign that said, 'Goodyear Rubber could have prevented this accident,' I just lost it!"