The Polar Plunge Was A Splashing Success 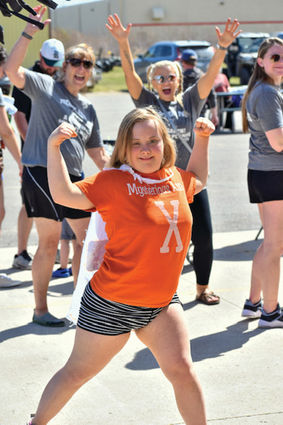 At noon on Sunday, Nikki Gustafson, one of the event's organizers, required just three words to sum up the first ever Polar Plunge on Saturday at Gene's Bar & Grill in Roseau.

"It was phenomenal!" she said, and there was no holding her back.

"It was awesome! In true Roseau fashion, our community showed up and supported everything."

A week ago Tuesday, she had high hopes that there would be a great turnout for the Polar Plunge, a fundraiser for Special Olympics Minnesota.

One of the highlights would be jumping into 5-foot deep portable pool provided by Special Olympics Minnesota.

"Everyone who registers to plunge needs to raise $75, and there are incentives for those who raise more money," she said a week ago Tuesday.

All the money goes back to Special Olympics Minnesota.

"We're calling it 'Plunging Into May.' We were given this opportunity when Special Olympics Minnesota called to reach out to Angie Weckman and me in early February asking if we would like to take on this event in Roseau. We teamed up with Tim Bjerk and Marcie Grove at Gene's Bar & Grill and decided this is something we could make really big in Roseau," said Ms. Gustafson, highlighting that Mike Hetteen would serve as the emcee.

This past Sunday, she declared it a smashing success.

It was a memorable event.

"We all plunged for Special Olympics Minnesota," she said, and then commented on the water temperature.

"It was colder than I expected it to be, but it wasn't as bad as jumping into the frozen river. The Roseau Fire Department filled it on Saturday morning, and I would guess it was 40 to 45 degree water. It wasn't warm!"

A moment later, she added it had been a refreshing plunge.

"I was in one of the first groups jumping in. Anna Krahn was our first plunger, and she is one of our Special Olympics athletes."

Ms. Krahn, a Roseau High School junior, was quite colorfully attired in her special swimwear.

"The mysterious Anna X had a cape and everything," said Nikki, adding that another Roseau Special Olympian, Mia Neville, was the second one to grace the water.

"We jumped together" said Mr. Weckman afterwards, mentioning that Thomas didn't like the cold water.

"There were other representatives from the school taking the plunge," said Nikki, noting that Team Polaris followed after them.

"I think we had about ten Polaris plungers, and the Roseau baseball team had about five. They were followed by four Roseau firemen - Austin Gunderson, Justin Peterson, Ben Edwards, and Kyle Hitner."

The taco in a bag sales went well with about 120 customers.

"It wasn't bad at all. After we covered the cost of the food, the rest went to Special Olympics Minnesota," she said, explaining that she and Angie Weckman were co-organizers of the Polar Plunge.

The main event on Friday evening was the cornhole tournament (bean bag toss).

"It was awesome. We had 24 teams show up, and Keith and Kelsey Vatnsdal won it. He runs a cornhole league in Roseau and had this event planned to a T," said Nikki, adding that each team paid $40 to compete.

The competition had started at 6 p.m. and the last game was completed by 10:30 p.m. Chris and Susie Nix took runner-up honors.

The winning team, the Vatnsdals, won $240 and donated it right back to Special Olympics Minnesota as did the Nixes.

"I don't know exactly what the second place team received," she said, thanking both couples for their generosity.

"They didn't have to crawl. It started at Gene's and ended at the American Legion," said Gustafson, noting that they received 75 completed Pub Crawl cards.

The entry fee was $20 and each entrant received a "1st Annual Pub Crawl" cup.

"We had Tommy Johnson from Red Barn Laser Engraving make them, and Tim Bjerk bought 100 of them and donated them to the cause. So each participant got the cup and then they pub crawled through Roseau," she said, adding that some of the crawlers had designated drivers.

The total amount raised by Sunday afternoon for Special Olympics Minnesota was $34,867.

"We're still taking donations," she said. "They can mail their checks to me at Nikki Gustafson, 408 3rd Street NE, Roseau, MN 56751 and I will forward their donations to Special Olympics Minnesota."

Next, she had terrific news.

"Yesterday, Tim Bjerk (the owner of Gene's Bar & Grill) asked us if we could do it for nine more years so that we can have a tenth anniversary."

"The rest of our team will make this a goal for the next nine years so we can celebrate a tenth anniversary."

A tip of the hat to Polaris and Gene's Bar & Grill for sponsoring the 2021 Polar Plunge for Special Olympics Minnesota.