Glenn Holm, 74, a Jadis Township resident who lives just northeast of Roseau, suffered critical neck injuries last Saturday around 5 p.m. when the Beaver airplane he was a passenger in flipped over as the pilot, Ronnie Davidson, was landing on Lake of the Woods near his resort.

Speaking on Monday evening, Janice Lindgren, a Grand Rapids resident, explained that the pilot and another passenger had suffered minor bruises.

"Dad was the only one hurt," she said, after visiting him in the Intensive Care Unit at Sanford Medical Center in Fargo.

"The doctors have told him over and over again, 'You should not be alive.' They can't believe he is alive because, first of all, it's amazing he didn't drown when he was in the water."

Far more seriously, he broke the C1 and C2 vertebrae in his upper neck, and the one fracture is broken in three different places.

"It's so close to his spine that he could have been paralyzed. He's in tough shape."

She mentioned that the Beaver aircraft experienced a hydraulic problem in the landing gear as Mr. Davidson attempted to land on the lake.

"It's routine for Ronnie to pick my dad up at the Roseau Airport. They're really good friends. Ronnie lands on the tarmac and then he flies my dad up to Sunset Lodge."

From her understanding, Ronnie went to switch from the wheels to the floats, but the hydraulics weren't working.

"The wheels stayed down but didn't give them a warning," she said. "So, when they landed on the water in front of Sunset Lodge, the plane immediately flipped over as people were watching it come in for the landing."

Quickly, they rushed out to assist in the rescue.

"Dad was riding up front in the copilot seat and a friend of theirs was seated in the back," she said.

Despite the severity of his injuries, his daughter credits his adrenaline for escaping upside down inside the plane and out onto the wing.

"My dad got in the boat from the wing. When they got to the dock, he had help walking to the cabin," she said, explaining that when they laid him down on the couch, he knew something was wrong.

Glenn was taken by boat to Young's Bay and then by ambulance to Roseau where he was airlifted to Fargo.

"He has a long road ahead of him," she said, and then added that her dad is a very special guy.

"He loves Kentucky Fried Chicken and everybody who knows my dad knows it's always his birthday every day, and his favorite meal is KFC."

His children are trying keep up his spirits up by teasing him.

"Like how much the socks cost that he's wearing in the hospital and, 'Oh, don't eat that Jello! It's probably $200 you're paying for that.' We're trying to have fun with him to keep him smiling and in good spirits."

According to his daughter, he's a very independent guy.

"I'm sad that my dad is in as tough a shape as he is. He said he felt like he was a bug on the windshield when the plane crashed."

My brother, Jay, is staying with him right now," she said on Monday evening as she was driving back to Grand Rapids.

"Apparently, he had a stroke, too," she said, adding that he is being sedated for pain. 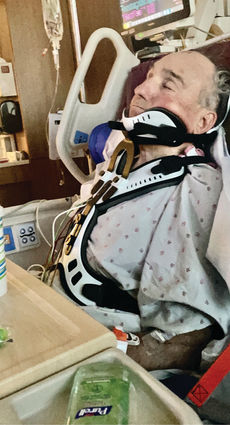 "They let him stand up today for the first time with a lot of help," she said, and shared that her dad never does anything in slow motion.

"They had to insist that he take slower steps and not be in such a big hurry," she said, laughing knowingly.

Outside his window in ICU, Glenn can see to the top of the hospital where the life flight helicopters land and take off.

"My dad is addicted to airplane noise, and he wants to see that helicopter so bad. I thought he was going to fall out of bed. He wanted to see it so bad that we closed the curtains. He gets so frustrated that he can't move his head."

There will be much better days for the man who loves Kentucky Fried Chicken and whose birthday is everyday.