Roseau Athletic Hall Of Fame Induction Is Next Sunday 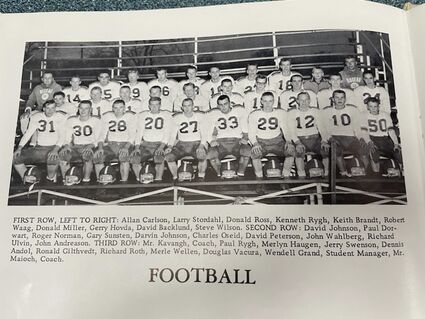 On Sunday, October 3, six individuals and one team will be inducted into the Roseau Athletic Hall of Fame.

The induction will be at 2 p.m. in the Roseau School Theater. Following the program, the inductees and their guests will meet in the Commons area for photos and refreshments.

From 2008 to 2010, he was honored with three straight Section 8A Coach of the Year honors. Additionally, from 2007 to 2010, he coached his singles and doubles players at the Class A State Tournament.

He's the John Madden of sports broadcasters - both radio and TV - and wasn't some country hick announcing checkers tournaments in Keokuk, Iowa, on his way up.

During his half century behind the mic, he was the play-by-play voice for the Wisconsin Badger's hockey team and worked eight straight NCAA I hockey tournaments, including the 1990 National Championship.

He could write the book on the WCHA hockey tournaments from years ago, having announced the Men's Final Five and Women's Final Faceoff from 1995 to 2001.

Swanson did the play-by-play for USA Hockey at the 2008 World Junior Championships in the Czech Republic and the 2009 U-18 World Hockey Tournament in Fargo.

He and his wife, Nancy, live in Roseau.

Ms. Ness, a 2011 RHS graduate and a gifted three-sport athlete who starred in tennis, hockey and golf, never met a sport she couldn't excel in.

The versatile athlete showed that she belonged on the golf course while qualifying to three state tournaments.

Her exploits weren't overlooked as Abby was named to the Class 2A All Tournament Team in 2010 and was a Top Ten finalist for the Ms. Hockey Award in 2011.

She then earned the gold medal with Team USA at the 2011 World Junior Championships in Stockholm, Sweden.

For six straight fall seasons, Abby was a tennis phenom as a six-time letter winner and six-time MVP for the Lady Rams tennis team.

She was impressive in winning three consecutive Section 8A singles championships while leading the Rams to three Section A team championships.

She played four years of hockey at St. Cloud State University, and was the 2012 Rookie of the Year and the team captain as a senior.

Abby lives in St. Louis Park and is a regional marketing specialist for Marsh & McLennan.

Coach B, who likes hard-nosed football and has the intensity of Bear Bryant, the late Alabama famed coach, was instrumental in the resurgence of Roseau Ram football at the turn of the century.

Their dominating opponent in the Class 3A quarterfinals both years was Becker High School, a football powerhouse that earned state runner-up honors in 2001.

A demanding coach and excellent tactician, Coach B was delighted that a number of his players saw success at the collegiate football level - Dustin Timmersman, Mark Fabian, Jon Prelvitz, Thor Didrikson, and Chase Pearson.

A native of Stephen, Minnesota, he played football for the Stephen Tigers and Mayville State University.

As the head basketball coach at Central Valley High School in North Dakota, he led the Valiants to the 1993 Class B state championship.

Anneliesse was born to swim fast, which is why she is considered the greatest swimmer in Roseau history.

It's a terrific legacy.

Her specialty was the 100-yard breaststroke, earning her six state tournament appearances and runner-up honors her junior year in 2002 and the state championship in 2003.

During her high school career, she won five Section 8A championships and was honored as the Section 8A Swimmer of the Year in 2002 and 2003.

During her collegiate career at UND where she was a four-year starter, her 2006 and 2007 teams won North Central Conference championships. She was also the team captain in 2007-2008.

During high school and college, she also coached the Roseau Rays swim teams.

Anneliesse is the Director of Aquatics at Concordia College in Moorhead and lives with her family in West Fargo, North Dakota.

Mr. Lund, the renowned octogenarian and member of the 1959 RHS state championship hockey team, played the game longer than the late Gordie Howe.

Until a few years ago, he was still competing at the senior amateur level - and winning tournaments.

But the success started decades earlier, when right out of high school, he played for the Warroad Lakers and then for the UMD Bulldogs.

As a college senior, he was selected to play on the 1965 U.S. National Team at the World Championships in Finland.

He is credited with helping to establish the Roseau Leafs senior hockey team in the 1970s and then with winning numerous senior hockey national championships, beginning in 2006 with a number of local hockey legends and some of the ringers he brought onto the team.

It was in 2009 that the Roseau-based Byfuglien Trucking teams went on a tear, winning nine straight national senior championships.

Bob and his wife, Judy, live in Roseau.

After 29 years without a Roseau High School state hockey title, Coach Blais - the Blaiser and the I-Falls Iron Ranger - made his appearance.

He came to town in the fall of 1989 and stopped a losing streak that had the local hockey fans wondering if they'd ever win a state title.

Blais made it happen.

He just might be the Clint Eastwood of coaches - allowing no nonsense, no parental interference, and insisting on solid hockey.

Roseau was back on the hockey map.

Blais left after earning a repeat trip to state in 1991.

In a lifetime of coaching, he was a winner at all levels - high school, college, and the pros.

After he arrived in Grand Forks as the UND head coach, he continuously coached winning programs. In 1997 and 2000, the Sioux won NCAA hockey championships.

He was born to coach!

Sometimes, you can't win 'em all even if you're a very good football team, which best describes the 1959 Rams.

They were 3-0 and on a roll when Crosby-Ironton put the halt to a perfect season as they rallied from a 7-6 halftime deficit to defeat the Rams, 19-7.

Then, these Rams put on a show over the next three weeks in defeating Crookston in a rainstorm, 27-7, with Dave Becklund running for one score and Dennis Andol pulling in a pass from Becklund for another TD.

Sixty-two years later, the next game against East Grand Forks Sacred Heart is still considered the most disappointing loss of the season.

The Catholic lads from the East Side played the Rams tough, forcing three first quarter fumbles and then denying the Rams the victory late in the game at the Sacred Heart four-yard line.

In the season finale, the Rams shut out East Grand Forks, 13-0, to nail down the Northwest Conference title, finishing their season with a 7 & 2 record.