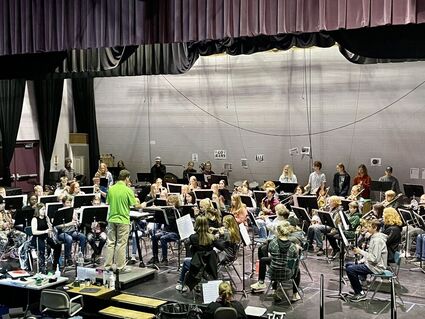 The RHS Band under the direction of Chris Barnes

Roseau's aging veterans won't stroll in in columns of twos, followed by an aging Color Guard marching in unison with spit-shined boots into the Roseau Elementary gym this coming Thursday.

In the recent past, these veterans came marching into the Roseau High School gymnasium ahead of the Color Guard while the Roseau High Band, under the direction of Chris Barnes, put a little pizazz into the air.

This will be the second straight year that the school isn't hosting the Veterans Day Program.

Last November, the Covid restrictions ruled that out.

But Mr. Bryce Lingen, the Roseau School Assistant Principal, is doing the right thing for our local veterans.

"Because we don't have the spacing to provide a community Veterans Day Program due to the building construction project, we're doing a virtual Veterans Day Program," he said, mentioning that it will be prerecorded and can be seen on Facebook and the Roseau School website.

"What we're excited about is, it is going to be entirely student led."

"It's going to be pretty unique," he said.

The National Anthem will be played by the high school band. Additionally, there will be musical selections from the fourth grade and high school choirs.

"Intertwined with all that, we will have the Social Studies Department addressing 'What Veterans Day means to you?' Students have been replying, and we will choose the top ones to read their papers," said Mr. Lingen, who has been impressed with their comments.

"We're in the process of prerecording it and getting everything lined up," he said in late October.

On November 11, the program will be presented on Facebook and the Roseau School website for the residents to watch.

"We are excited about it for only being virtual. Obviously, we can't wait until next year when the building is done, and we can have a big celebration," he said, adding that it is important to honor area veterans.

There will be at least five speakers, according to Mr. Lingen, noting that everything will depend on the length of each speech.

"There could be a dozen speakers if all of their speeches are about 30 seconds in length."

The speakers will be sprinkled in between the songs and the different presentations.

Present plans are to air the Veterans Day Program in the morning of Thursday, November 11.

It will be respectfully done to honor all those who saw action and/or served in our nation's armed forces.