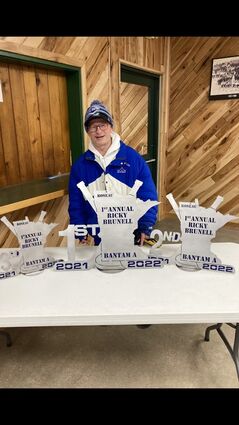 Ricky with the trophies

You can have all the Wayne Gretzky and Gordie Howe youth tournaments, but it's seldom there has been an ordinary bloke who gets his own tournament.

Maybe someday, he will add a Gump Worsley Peewee Tournament. The late Mr. Worsley, an NHL Hall of Fame goalie, was built like a beer keg.

"He's just been a fixture in this rink for more than 35 years. He's around here all the time, and he helps with cleaning and keeps an eye on the kids, hangs out with them, and gives them tips," said Lund, noting a day prior to the tourney that Ricky is pumped up about the tournament being named in his honor.

At 52, Mr. Brunell never starred in the game, never once even stepped out on the ice for the Roseau Rams or for any youth teams.

But he's deserving, according to Billy, one of the stars on the 1990 state championship RHS hockey team.

"He's been a pretty important kid around here for many years, and he's been pumped for two months."

It was back in June when Mr. Lund was crafting a new Bantam tournament.

"And I thought, you know, we've got Neal and Aaron and Paul Broten. We should have a Ricky Brunell because these Edina teams come up, and he kind of gravitates to them. He goes and gives their teams tips. He does a lot for all the tournament teams, and everybody knows Ricky."

Last Thursday, Billy was enjoying the calm before the storm.

Every tournament has its challenges, but the 1st Annual Ricky Brunell Bantam A Tournament put a smile on his outlook.

He talked about the man being honored.

"Ricky had knee surgery a month ago, and he's been worried if he could go out on the ice to drop the puck. We'll do it over by the penalty box."

"What an honor for Roseau's number one sports fan and supporter. He is more than worthy of this honor. Great choice! If you want to know what's going on in the sports world in Roseau, he's the man," said Mr. Gotziaman.

Likewise, Dean Housker, one of Ricky's 1988 RHS classmates, was impressed.

"Ricky doesn't miss a hockey game and is at the rink all the time. He cheers for the Rams and is out skating with the kids on the North Rink during open hockey. Oh, my God, he can skate! He just loves playing hockey," said Mr. Housker, adding that Ricky is everybody's buddy.

"He's probably the biggest Ram hockey fan in town," he said from somewhere in Kentucky driving his big rig.

There were a total of 10 Bantam A/AA teams competing for three days last weekend at Memorial Arena and the North Rink.

On Sunday evening, Billy gave thumbs up to a really good tournament.

"Rosemount beat St. Michael in the championship on Sunday afternoon. They whipped them pretty good. Roseau took 5th place," he said, noting that Ricky handed out the win, place and show trophies and had dropped the puck for Friday's opening game.

"Metal trophies were cut out in the shape of Minnesota," he said, and immediately laughed.

"I asked Ricky if we should do a second annual or let this be the last one. 'No,' he said, 'let's do one next year.' That was good," said Billy.

Mr. Lund thanked all the parents who ran the three Bantam A tournaments this season.

"We only had 10 sets of parents, and they did an outstanding job all year. It's a lot of work for the parents."

On Monday morning, Ricky Brunell was resting at home.