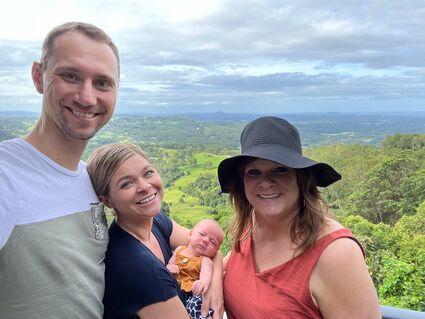 Sebastian, Sheena and baby Emma with Grandma Lynette Blawat, who was visiting in March

In June, the former Sheena Daignault was spotted in SuperOne in Roseau.

She has a delightful smile, was talking with another woman, and both were communicating in a foreign language.

A baby girl sat quietly in an infant seat in a shopping cart.

The former Ms. Daignault speaks fluent German, which is the result of a chance encounter during a college semester abroad in Australia.

Australians, as a whole, do not speak German.

Sheena had attended school in Roseau for a while and was asked the lineage of Daignault.

"It's French Canadian," she said.