THE HOLIDAY TRAIN IS COMING SOON! 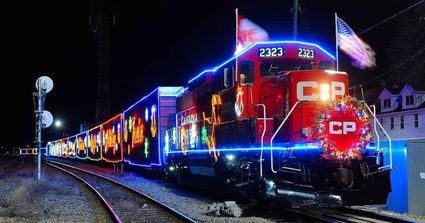 The Holiday Train Is Coming Soon!

You know Christmas is getting closer when the Holiday Train schedule is released! It was announced that the Canadian Pacific Holiday Train will be making its way through Wisconsin, Minnesota, and Iowa starting December 2, 2019. Performance stops will include 46 towns across the three states.

I've always wanted to check out the Holiday Train in Thief River Falls, but never seem to find the time. I'm going to try again this year!

The Holiday train is entering its 21st year, and it uses music and community spirit to raise money and generate healthy food donations for food banks in communities along CP's network.

Performing this year on the Canadian Pacific Holiday Train will be Meghan Patrick, Tanika Charles and Kelly Prescott.

Here are a few of the scheduled stops:

Location: W of US 59 and S of E Washington Avenue

If you have extra time be sure to check out the Holiday Train and make it a holiday tradition!

Jokes of the Week

• After his annual physical, a man was told by his doctor that he needed to watch his weight. So he decided to get it out where he could see it!

• Another man went to his annual physical. After the exam the doctor told him he needed to "diet". But the man said he like it the color it was!

• A lady joined weight watchers and then entered the competition for the "no-belly-prize award"!"

Thanks Pastor Joe for the jokes! I still haven't decided which is the better humor the jokes or Julie trying to figure them out and can't so she just tells Pastor Joe they are dumb. He usually explains them to her in the evening and the next day she still thinks they just aren't funny. Gotta love Julie!!

The two of them are the most amazing couple and are just too cute on how they are with each other. I give them the couple of the year award!!

Advice from An Old Farmer

Keep skunks and bankers at a distance.

Life is simpler when you plow around the stump.

A bumble bee is considerably faster than a John Deere tractor.

Words that soak into your ears are whispered... not yelled.

Forgive your enemies; it messes up their heads.

Do not corner something that you know is meaner than you.

It don't take a very big person to carry a grudge.

You cannot unsay a cruel word.

Every path has a few puddles.

When you wallow with pigs, expect to get dirty.

The best sermons are lived, not preached.

Most of the stuff people worry about ain't never gonna happen anyway.

Don't judge folks by their relatives.

Remember that silence is sometimes the best answer.

Live a good, honorable life... Then when you get older and think back, you'll enjoy it a second time.

Don 't interfere with somethin' that ain't bothering you none.

Timing has a lot to do with the outcome of a Rain dance.

If you find yourself in a hole, the first thing to do is stop diggin'.

The biggest troublemaker you'll probably ever have to deal with, watches you from the mirror every mornin'.

Always drink upstream from the herd.

Lettin' the cat outta the bag is a whole lot easier than puttin' it back in.

If you get to thinkin' you're a person of some influence, try orderin' somebody else's dog around..

Don't pick a fight with an old man. If he is too old to fight, he'll just kill you.

Most times, it just gets down to common sense.