So What Do You Do With An Unmade Bed? 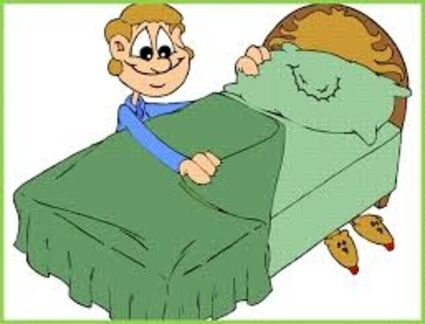 I want to be right upfront about what I'm about to write. You may recognize it being mentioned in past articles, but I'm stirred in my heart to bring to your attention what's on my mind.

Here's one you may remember which will become the foundation for the rest of the article. One of my spiritual heroes out of the past is the late Dr. Bob Smith, a professor for many years at Bethel College and Seminary in St. Paul, Minnesota. In a class I was taking from him he shared an experience from his childhood that influenced the rest of his life. Shortly after he had accepted Jesus as his personal Savior at the age of 12 he woke up one morning, pulled back the covers, got down on his knees, folded his hands and prayed: "Lord, show me something to do for you today." He said, "Then I opened my eyes, and what did I see? An unmade bed. So I made it!" That request to the Lord, "Show me something to do for you Lord, went with him the rest of his life. We never know how what we say to a child may influence their life from then on: either positively or negatively. Can you relate to this as a child.

I'd like to relate three examples of how this statement influenced Dr. Bob during his later years. While I was at Bethel there was a student there who suffered from an incurable disease which was increasingly making her immobile. While I was there she walked with crutches. She would attempt to make her way across campus with the crutches while attempting to hold whatever books she had (that was before backpacks were popular.) If Dr. Bob happened to be out and saw her struggling, he would come to her aid and carry her books for her to her next class ("Lord, show me something to do for you today.")

He shared with us in class that one day he was sitting next to her in the school cafeteria. She turned to him and asked, "Dr. Bob, would you cut my meat and spread my bread?" ("Lord, show me something to do for you today!" He said this to us with tears rolling down his cheeks that after lunch he went back to his office in the seminary building, got down on his knees, and thanked the Lord that he could, "cut his meat," and "spread his bread." Have you ever been thankful for things like this?

One time as winter was coming on, Dr. Bob's son, a college student at Bethel, had a friend over to visit. Not too long before this, Dr. Bob had bought a new winter overcoat for his old one was just about worn out. While the student was there Dr. Bob noticed that the young man had no winter coat. So guess what he did. He gave the young man his NEW winter coat and continued to wear his old one ("Lord, show me something to do for you today!").

So what about the rest of us? Can a 12 year old boy's simple prayer speak to us about living the Christian life? I think so. The apostle Paul put it this way in Philippians 2:10: "for we are God's masterpiece. He has created us anew in Christ Jesus, so that we can do the good things he planned for us long ago." At the age of 12 Dr. Bob had no idea of the depth of what he was praying. But he would!

I think the "two greatest commandments" (see Matthew 22: 34-40) are captured in this prayer: "Love the Lord your God with all your heart, all your soul, and all your mind. A (or the) second is equally important: 'Love your neighbor as yourself.'" The first captures our commitment to God. The second can include loving our neighbor as ourselves. But there's much, much more to doing something for God.

Now finding something to do for God does not include just the religious; it might include making a bed. We need to ask God to keep our eyes open to the possibilities. The world around us should become a better place because we're there. I try to keep this in mind while picking up trash on my walks. I do hope to get back to this. I want to help keep God's world clean. Recently I noticed that the suet block was all gone from our bird feeder. Time to replace it. Something to do for God (and the birds). Maybe taking out the trash would qualify. Do you get the point?

Doing something for God may have to do with the mouth; how we speak to others or about them. It can also have to do with how we treat them. Don't forget the second greatest commandment: "love your neighbor as yourself." (Would I like others to talk about me like I talk about them? We all sin, and have a rocky past.)

I also pray Dr. Bob's childhood prayer this way: "Lord, this day, give me your eyes to see, your ears to hear, and your heart to bring the light and love of Jesus to everyone I meet and interact with." I think Dr. Bob would approve.

So, have you seen any "unmade beds" lately?