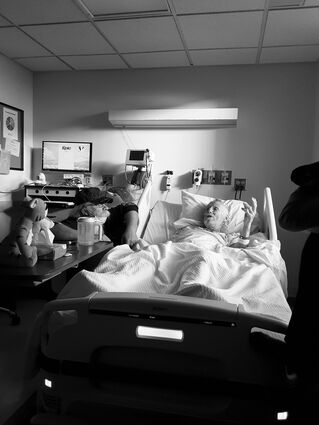 Joe and his friend Mitch

My greatest fear all my life was thinking about losing a loved one to death. I am not going to get deep into this because I know that a lot of you have the same fear. What does it take to deal with this kind of situation? I would circumvent the subject as much as possible. I never attended a funeral until I was 21 and I did that at a distance. As long as things went smoothly with my family I was in a safe ok world.

Then it happened. My dad died suddenly in Dec 1999. He was in his 80s. He came in the house and told my mom that he wasn't feeling very good. He had been outside clearing brush. He loved to work on their property making more space amongst the trees to walk. He took a shower, laid down in their bed and died. Just like that. No warning, and it was over.

My mother had a blood clot in her brain. They did what they do and she went on blood thinners. This maybe went on for a couple of years. In August of 2002, she had a stroke, and as she was having it, she called 911. They came and saw that she was gone. Both of my parents died instantly, with no pain.

Joe is in the hospital here in Roseau. By the time you read this column he may have already left for his home in Heaven. He is ready and anxious to get there. His biggest fear is that he lingers. He was in for a standard appointment for his kidney issues. At the appointment it was found that he had a fever and some other issues that concerned them. He went directly from that appointment to the ER. They did a CT scan and blood work. It was found that he had a partial blockage in his small intestine around the area in which he had Whipple Surgery a few years back.

It was also found that his liver had gotten smaller. Sepsis in his blood could have caused his liver problems. Our ER doctor chose to keep him here overnight saying that she wanted our primary physician to assess our situation. To go into surgery would just be a bandaid for his bigger problem. His liver was dying. This meant that his situation was terminal. The decision was made to keep him comfortable here in Roseau.

Last Saturday evening, he was struggling with his biggest fear of lingering for a long time on this earth. As we began to talk about it a really big guy came in our room. No, he wasn't an angel, although he could have been. He said Hi, my name is ... and I am going to be one of your nurses for the evening. I just came in to check on you and ask you if there is anything I can do for you.

Joe immediately said, "well what I want is to go to Heaven to be with the Lord. And I want to go right now!" The big man stood there and pondered a few seconds, and then said, "well, I need to give you a word. It isn't a magic word, but it is a very important word. The word is 'endurance. I turned to him and said, "what did you say?" He repeated the word "endurance." I said, "you have no idea what it means to us to hear you say that.

I am not going to get all religious on you but, on the 9th of this month, God spoke to my husband, He does that. God gave my husband a verse out of the Bible. It is Hebrews 10: 36 which says,, "patient endurance is what you need now!"

He sat down and looked at Joe and said, "well then, there is one more thing I need to say, every day you live is important. There are people who work here, nurses, lab people, doctors, who need to be encouraged by you so they will have a better life. You are not in control of your days so you better be on the alert to the people who come into your life!"

Then he got up and said he was going to sign in or something, and get his med list. He said, "I will see you later this evening," and then left.

Joe and I were speechless, and just looked at each other. Finally Joe said, "well, that nailed it!" WOW. What are the odds? You tell me!

There is a God and He is concerned about us. He walks through hard paths with us, and confirms the directions and counsel given. The first part of the verses God gave Joe in Hebrews 10 was verse 35. It says "Don't throw away your confident trust in the Lord." This means don't go and try to find another god or a psychic when things don't go the way you want. The "KICKER" is at the end of verse 35, it says "NO MATTER WHAT HAPPENS!"

There it is, and here I am, I can cry with no warning, but am finding amazing comfort and peace. I am also thankful for the sleep I am getting each night.

Londa, my daughter, has been a great comfort to me, and hopefully I am to her.

My son-in-law, Marlin, is a true gift.

Pastor Joe, my beloved husband of 53 years, is going to leave this earth and step into eternity. He will be reunited with his mom and dad, and also my parents. What a joyous reunion that will be.

But nothing will compare with the moment he sees Jesus. He will fall at his feet and worship him. Finally complete and knowing that EVERYTHING IS OK!